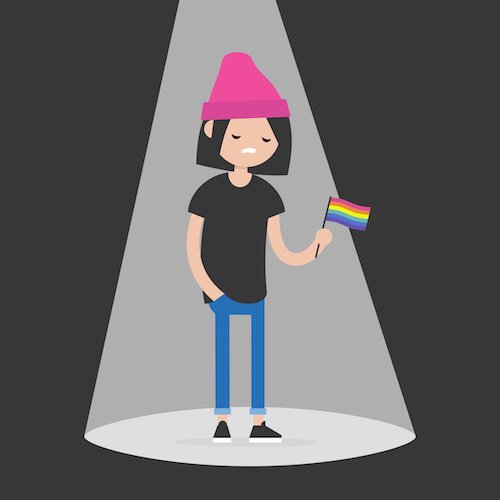 As a gay man, my earliest feelings of attraction to other men in adolescence were accompanied by an awareness that they conflicted with my immigrant parents’ expectations. I suppressed outward displays of my sexual orientation and retreated. I grew depressed and anxious. I felt pressure not to upend my family’s and society’s expectations of me.

I ultimately found solace in a chosen family of friends in high school. They were mostly young women, also of minority and countercultures, who also did not conform to family expectations. Unfortunately, I was forced to leave them behind when I moved with my family to the town where I attended university. My new home offered no queer community or network of friends. My hope evaporated. And one day, I attempted suicide.

Sadly my story is not uncommon for someone in my community, as being LGBTQ puts a person at a higher risk for suicide attempts. LGB adults are also more than twice as likely as heterosexual adults to experience a mental health condition.

There are many reasons for this, including the discrimination, prejudice, violence and family rejection that people in the LGBTQ+ community experience. And while it is encouraging that in the last decade more communities are securing equal rights, non-discrimination protections and increasing public support for their civil and political rights—we still have a long way to go when it comes to LGBTQ+ mental health.

Here are some of the main challenges the community faces as well as suggestions for improvement.

Coming Out And Family Estrangement

When I finally came out to my parents, they concluded I must be sick. Surprisingly, the family doctor in our community rebuked them. His support helped me with anxiety and allowed my parents to tolerate my existence—although they seemed incapable of considering or prioritizing my well-being and happiness.

Substance Use And A Lack Of Support

My university and early work years were a constant grind with little time for self-care and self-reflection. I escaped into short bouts of alcohol abuse and risky sexual behaviors. Substance use is an issue within the LGBTQ+ community. Research shows that 44% of LGB adults are likely to have problems with alcoholism compared to 24-33% for others.

I was also grappling with the stigma of HIV deaths in my new community. The proximity of death forced me to confront some basic questions about life. I was not coping well, and I couldn’t rely on family for support or solace. So I had to seek support from a broader range of people.

LGBTQ+ mental health experiences are very individualized. Health needs of the LGBTQ+ community often are grouped together, yet each sub-community represents a distinct population with their own unique mental health challenges, rates of mental illness, experiences and coping strategies. We should address these issues accordingly. Additionally, knowing the appropriate language to describe gender identity and sexual orientation is important in understanding and recognizing this diversity.

Having a caring and understanding doctor can make a tremendous difference, but many people don’t have access to this level of care. The key obstacles to effective mental health treatment are systemic harassment and lack of cultural competency, in addition to low rates of insurance coverage. As a result, 30% of LGB adults are more likely to delay or not seek medical care compared to 17% in other communities.

Those who receive treatment sometimes fear disclosing their sexual orientation or gender identity for fear of discrimination and gender bias. Therefore, doctors are often unaware of specific needs among LGBTQ+ patients, which may limit their ability to treat and advise them properly.

There are many ways to improve mental health care, including early intervention, appropriate and comprehensive treatment and family support. It’s important to recognize the challenges of coming out and the possible lack of family or chosen-family support. Health care providers must also address implicit bias and stereotyping.

There are also simple ways that health care providers can create a welcoming treatment environment. They can prominently display a non-discrimination policy and a pride or a trans-pride flag. Offering reading and informational material relevant to the community as well as knowing local LGBTQ+ resources helps. It also helps if employees avoid assumptions about gender identity and sexual orientation based on appearance and ask for one’s preferred pronouns. They also should use gender-inclusive language on forms and while communicating with patients.

We need much more research on LGBTQ+ mental health needs. We could facilitate this research if the LGBTQ+ community were able to identify themselves fully on surveys. Eroding the barriers of stigma and rejection to coming out is key to addressing the additional risks these communities face. Additionally, members of the LGBTQ+ community identifying themselves enriches research on the community’s mental health needs.

After my third visit to an emergency room with severe exhausting chest pains, I realized that even after surviving a suicide attempt and facing the cumulative grief of the loss of many friends and clients due to HIV, I had to come to terms with the fact I had not made enough positive change in my life. I want to live fully, so I’ve been focusing much more on my own health and self-care. I’ve finally concluded that seeing a therapist would be beneficial. And with a few false starts, I am still hopeful I can find a good match for my own counseling needs.

Effectively addressing LGBTQ+ mental health disparities will require our society—including friends and family and medical providers—to affirm, accept and respect the LGBTQ+ community. Everybody deserves and is worthy of access to good mental health care and support to achieve the best outcomes, regardless of gender identity or sexual orientation.

Rui Pires has worked in queer sexual health for the past 30 years, with a simultaneous career in the community-based poverty field serving as a financial trustee with people who found themselves homeless due to chaotic substances use or due to severe mental health challenges. He has sat on the boards of directors of several non-profit social service, cultural and human rights groups. Rui has struggled with anxiety as a child and for all his adult life.

Katherine Ponte is a mental health advocate, writer and entrepreneur. She is the founder of ForLikeMinds, the first online peer-based support community dedicated to people living with or supporting someone with mental illness, and Bipolar Thriving, a recovery coaching service for caregivers and their loved ones affected by bipolar disorder. She is also the creator of the Psych Ward Greeting Cards program in which she personally shares her recovery experiences and distributes donated greeting cards to patients in psychiatric units. She is in recovery from severe bipolar I disorder with psychosis. She is also on the board of NAMI New York City.